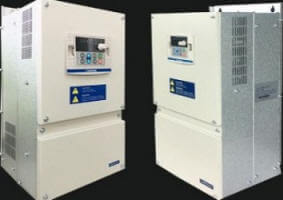 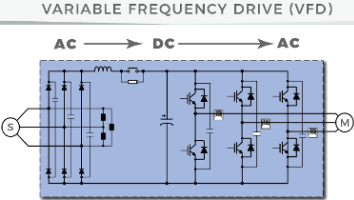 The major device used today to vary the speed of induction, 3-phase motors, is the VFD (Variable Frequency Drive) or Inverter.

Let's talk about the reason the VFD works, and why it came about. First of all, a 3-phase induction motor is designed basically to run at ONE speed. That speed is referred to as it's "Synchronous Speed" and it is a factor that is physically designed into the mechanics of the motor. A 3-phase AC Induction motor is made up of electrical windings within a steel "stator". These windings are designed and connected to form electrical "poles". A 3-phase electric motor has "poles" in "even" numbers; i.e. 2, 4, 6, etc. The higher the pole count, the slower the motor turns. Due to the characteristics of 3-phase electrical power, these poles cause the rotating portion of the motor (the rotor) to rotate at SPECIFIC RPM's based on the number of poles and the frequency of the power being supplied to the motor.

The electrical formula is:

So if we have an electric motor, designed to operate on 60 Hz power, with 4 poles, the result is:

If you follow this formula you can see that the "120" is a constant and the "4" is the number of poles, which is a mechanical characteristic of the motor design. The ONLY variable that will change the speed of the AC Induction Motor is the FREQUENCY. Other electrical characteristics like VOLTAGE and CURRENT don't exist in the formula.

So that's how and why the VFD works!!!

The internal workings of the drive are as follows:

The AC incoming power is fed to a FULL WAVE BRIDGE RECTIFIER which converts it to DC power. The DC power is then manipulated by the control board of the drive and reproduces a sinusoidal waveform with a varying frequency. There is a constant built into the waveform called the Volts per Hertz ratio. This value has to do with the fact that if you were to power the motor with lower than design frequency but full voltage, the magnet field produced by the windings of the motor would "over-saturate" the stator core, and the motor would overheat and burn up. So the Volts per Hertz (V/Hz) is a ratio of the power line frequency and full line voltage. Let's use the example of 480VAC and 60 Hz. In this case, our V/Hz is 480/60, or 8 V/Hz. So as the motor is started, it will be powered by 8 volts for every cycle of power. At 30 Hz (half speed) the voltage being fed to the motor is 30 x 8 or 240VAC, half voltage.

VFD's have various features and protections that make them excellent for controlling electric motors in commercial and industrial applications. Acceleration and deceleration are very important to afford soft starting and stopping of varying loads. Electronic overload protection is quick to respond and also offers excellent single-phase protection.

The VFD is today's "solution of choice" for varying the speed of an AC Induction Motor.

There are a few methods used, other than the VFD, but these are considered "specialty" motors and controllers or older technology.

One of the older technologies is the use of a "Wound Rotor Motor", also referred to as a "Slip Ring Motor". While I refer to this as "older technology", it is certainly still in use today with the same benefits as it had at its inception. 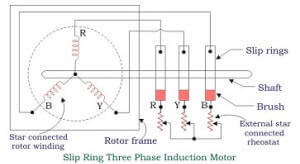 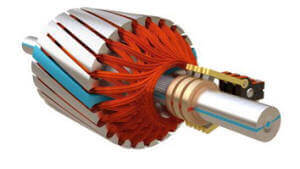 The Rotor of a Wound Rotor Induction Motor

In a Wound Rotor Induction Motor, the rotor has a 3-phase winding similar to the stator winding. The Rotor is also cylindrical and has slots to carry the electrical windings. The winding is placed evenly in the slots of the rotor, and each phase is connected to 1 of the 3 slip rings that are mounted on the shaft. These rings have brushes contacting them, and through the controller, are connected to external resistors.

The three slip rings rotate with rotor, while brushes remain stationary. This motor is different from a standard 3-phase induction motor because of these slip rings and the rotor winding. The speed and torque can be adjusted in these motors by changing the resistance connected to the brushes.

A slip ring (wound rotor motor) has a high starting torque, compared to its counterpart, the standard induction motor, and an additional benefit is the ability to vary the speed. While that speed variation is only accurate between 50 and 100 percent of full load speed, that's something that isn't possible with a standard induction motor. Another plus for the slip ring motor is that it draws less starting current than the standard.

But let's address some of the "cons" about the slip ring motor. The slip rings and brushes require additional maintenance that doesn't exist with a standard induction motor. Also, they are more expensive to purchase and more expensive to have repaired than a standard induction motor. Overall, they are less efficient and have a lower power factor than an induction motor too. So why use them...? High starting torque, smooth starting, and variable speed are the major factors for their use in industry.

Wound Rotor Motors are used in applications where a smooth start and adjustable speed is required. They also excel in those applications associated with high inertia loads. So look for the slip ring motor in elevators, cranes, hoists, conveyors, fans, blowers, large water pumps, mixers, and mills. Wound Rotor Motors and their controls still have a place in the industrial market, you just have to think about the plusses and minuses when you do the application.