Variable speed drives are needed because many applications are not run at the same speed all of the time, due to the surrounding conditions. Revolutions per minute (RPM) of the driven shaft need to be increased or decreased when there are changes in load conditions, application requirements, or other circumstances.

Variable speed belt drives achieve the versatility needed to maximize application efficiency and productivity while remaining an inexpensive solution. In the most typical installation, a belt connects a variable speed pulley to a driven sheave. The pulley mounts on a motor shaft with the motor operating at a constant speed. Thus, the speed at the driven shaft is a ratio of the pitch diameters of the pulley and sheave.

There are numerous types of variable speed drive systems, but they all have the same basic characteristics. A "fixed diameter pulley/sheave" (usually referred to as the "companion sheave"), as one item, and an "adjustable" pitch diameter sheave as the second item. Then we need a belt (or multiple belts) as the torque carrying medium. The belts can be a true variable speed belt, which looks a lot like a timing/synchronous belt, or it could be a "flat belt," or even one or more standard "V-belts" (if we have a "multi-groove" sheave in the drive system). 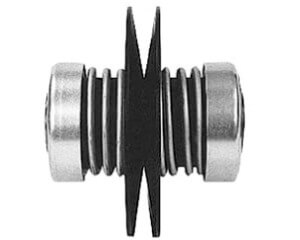 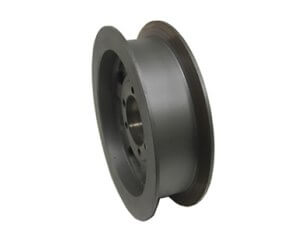 Now, the "adjustable" sheave is a special component. It can be a "spring-loaded" sheave. This is a sheave where at least one of the side plates of the sheave will push against a very strong spring that fits over the hub of the sheave. The "adjustment" of this sheave is accomplished by pulling the belt into the sheave groove. As we apply more pressure on the sheave-groove, the spring allows the side plate to move outward. As it does, the belt moves downward into the cavity between the two side plates of the sheave. When it does, the "pitch diameter" of the adjustable sheave gets smaller... changing the ratio between itself and the companion sheave. This movement can be by a sliding base of the motor driving it or it can be a mechanical screw attachment to the sheave. This type of drive system is used if the speed variation needs to be changed more frequently. With a sliding base on the driving motor, the base can even be a "motorized" mechanism so the operator simply presses a pushbutton and changes the speed as compared to manually adjusting a screw. 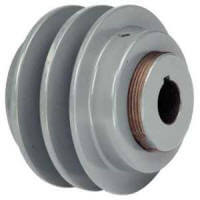 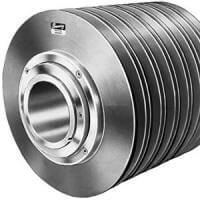 If the speed change does not happen very often, you can use a "mechanically" modified sheave as the adjustable one. This type of sheave has the side plates on a threaded shaft. When the speed needs to be changed, we change the "pitch diameter" of the sheave by adjusting the nuts that secure the side plates of the sheave. Moving the plates in will cause the pitch diameter to be larger while moving them out, makes it smaller.

These sheaves, like most others, can be "bored to size" or be of the "tapered bushing" design.

Don't hesitate to talk with one of our sales representatives about your application when it comes to variable speed systems. I'll bet we can offer at least ONE solution... maybe more.