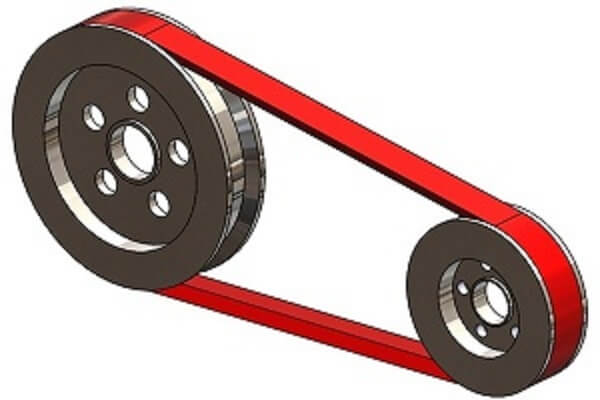 The Basics of V-Belts and Sheaves

When looking for V-belts we normally think that there is only one type of V Belts but there are several and each one of them with specific properties to work better depending on the type of application.

Here is a small sampling of the types of V-belts on the market and the specifics of each one of them. In some cases, descriptions and details were partially transcribed from Wikipedia.com. The category, in this case, was "Belts". Click this link for the FULL document on their website.

V belts (also style V-belts, vee belts, or, less commonly, wedge rope) solved the slippage and alignment problem. It is now the basic belt for power transmission. They provide the best combination of traction, speed of movement, the load of the bearings, and long service life. They are generally endless, and their general cross-section shape is roughly trapezoidal (hence the name "V"). The "V" shape of the belt tracks in a mating groove in the pulley (or sheave), with the result that the belt cannot slip off. The belt also tends to wedge into the groove as the load increases—the greater the load, the greater the wedging action—improving torque transmission and making the V-belt an effective solution, needing less width and tension than flat belts. V-belts trump flat belts with their small center distances and high reduction ratios. The preferred center distance is larger than the largest pulley diameter, but less than three times the sum of both pulleys. Optimal speed range is 1,000–7,000 ft/minute (300–2,130 m/minute). V-belts need larger pulleys for their thicker cross-section than flat belts.

For high-power requirements, two or more V-belts can be joined side-by-side in an arrangement called a multi-V, running on matching multi-groove sheaves. This is known as a multiple-V-belt drive (or sometimes a "classical V-belt drive").

V-belts may be homogeneously rubber or polymer throughout, or there may be fibers embedded in the rubber or polymer for strength and reinforcement. The fibers may be of textile materials such as cotton, polyamide (such as Nylon) or polyester or, for greatest strength, of steel or aramid (such as Technora, Twaron or Kevlar).

When an endless belt does not fit the need, jointed and link V-belts may be employed. Most models offer the same power and speed ratings as equivalently-sized endless belts and do not require special pulleys to operate. A link v-belt is several polyurethane/polyester composite links held together, either by themselves, such as Fenner Drives' PowerTwist, or Nu-T-Link (with metal studs). These provide easy installation and superior environmental resistance compared to rubber belts and are length-adjustable by disassembling and removing links when needed.

Trade journal coverage of V-belts in automobiles from 1916 mentioned leather as the belt material and mentioned that the V angle was not yet well standardized. The endless rubber V-belt was developed in 1917 by John Gates of the Gates Rubber Company. The Multiple-V-belt drive was first arranged a few years later by Walter Geist of the Allis-Chalmers Corporation, who was inspired to replace the single rope of multi-groove-sheave rope drives with multiple V-belts running parallel. Geist filed for a patent in 1925, and Allis-Chalmers began marketing the drive under the "Texrope" brand; the patent was granted in 1928 (U.S. Patent 1,662,511). The "Texrope" brand still exists, although it has changed ownership and no longer refers to multiple-V-belt drive alone. 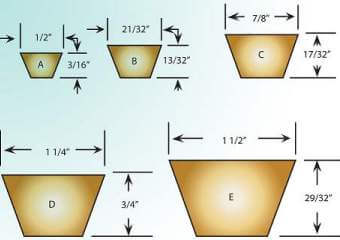 This is the most common type of V belts. Depending on the width there are 5 types (sizes) of classic V-belts. They are commonly used in agricultural applications and industrial machinery. They have a good temperature resistance (-31°F to 158°F) but a limited resistance to oil. The way they are measured is with the top width and the internal length (in inches). The belt side angle is approximately 40°

They are designed mainly for low horsepower applications that require lower maintenance because of the operation conditions like oil, dust and high temperature. Depending on the width there are 4 types (sizes) of fractional wrapped belts, as shown above. 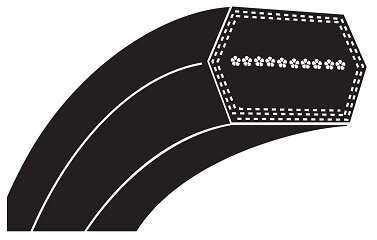 They are used in applications where power transmission is needed on both sides of the belt. Depending on the width there are 3 types (sizes) of double sided belts; AA, BB, and CC.

They are commonly used in textile and industrial applications.

They have a good temperature resistance (-31°F to 158°F) but a limited resistance to oil.

The way they are measured is with the width of the cross-section center (midpoint) and the internal length (in inches). 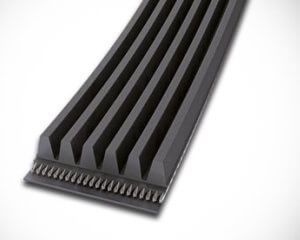 They are used by original equipment manufacturers in applications where the pulley design requires two or more v belts joined together to connect multiple pulley drives avoiding load fluctuations or belt turn over. Depending on the width, and if they are cogged, there are 9 types of banded belts.

They have a  good temperature resistance (-31°F to 158°F) but limited resistance to oil.

The way they are measured is by the number of bands, the width of each band and the internal length. 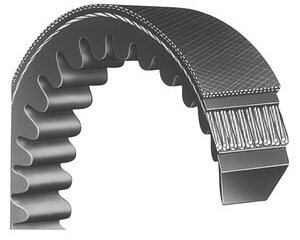 They are used in applications with small pulley diameters and high speeds. The slots on the belt reduce the bending resistance and keep operating temperatures lower. The way they are measured is by the top width of the belt and the internal length. Depending on the width there are 6 types (sizes) of cogged belts.

They have a good temperature resistance (-31°F to 158°F) but limited resistance to oil.

They are used in industrial applications like fan belts, vacuums, and the printing industry. They can transmit 1.5 to 2 times more power than classical belts. The way they are measured is by the top width of the belt and the internal length. Depending on the width there are 4 types of metric belts and an additional 3 "hybrid modifications". 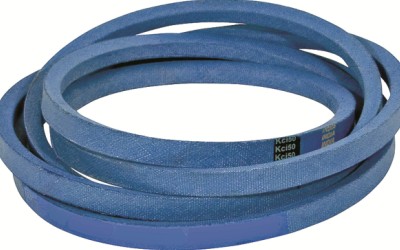 Aramid belts are designed for some of the most demanding applications where high resistance against oil, grease, dirt, and moisture is required. The most common applications are mowers, aerospace and military applications. The way they are measured is by the top width of the belt and the internal length. Depending on the width there are 7 types (sizes) of Kevlar belts.

They have good temperature resistance (-31°F to 158°F) and resistance to oil, grease, and moisture.

The belt is placed around the two sheaves while the center distance between them is reduced, Then the  sheaves are moved apart. Moving the sheaves apart produces pressure/tension on the belt(s), causing friction between the sides of the belt against the machined groove of the sheave. This friction causes the belt to grip the driving sheave, increasing the tension on one side, called the "tight side" of the drive. The opposite side of the belt (called the "slack side"), is still under tension, although at a smaller value. 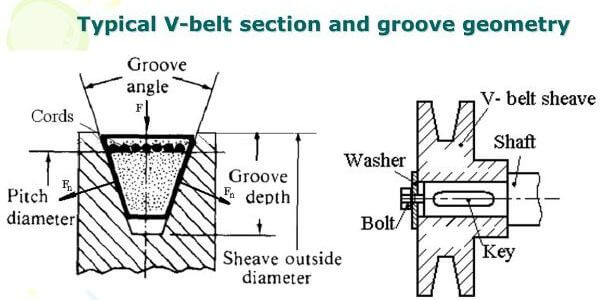 The Pulley/Sheave is normally constructed of steel, cast iron, or aluminum alloy. The casting has a circumferential groove either machined or cast into that circumference. The "size" of a sheave is indicated by its "Pitch Diameter." That Pitch Diameter is a value measured slightly inside the total diameter of the sheave. Keep in mind that a V-belt/sheave combination is such that the belt transmits the torque by the friction caused between the belt "side faces," and the "groove side faces." The bottom of the groove is NOT a load-carrying carrying portion of the design!

How do you maintain sheaves and belts and How do you know when they need to be changed?

Belts and sheaves simply "wear out" and need to be replaced after a while. But how do we know when? Well, here's a drawing that will give you an idea of the sheave/belt system... 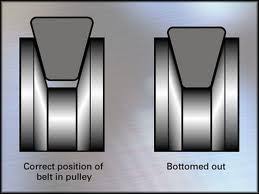 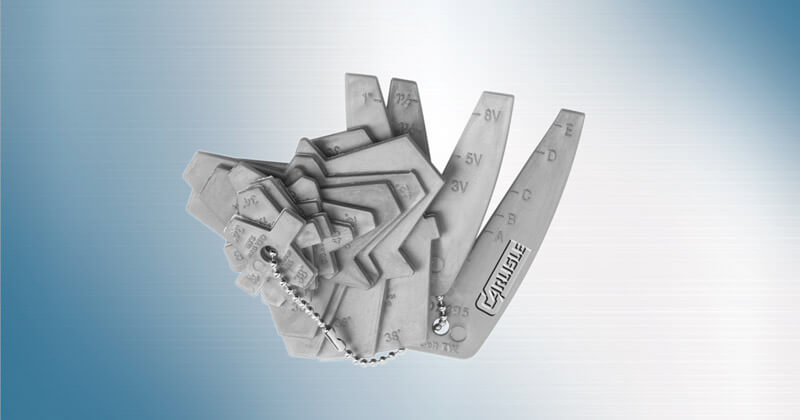 How do you know what size belt is correct for the sheave you have? Well, measuring with a caliper works, but manufacturers have made it easier. They've created a set of "gauges". They can be made of either metal or plastic and are cut/molded to the exact dimensions of a specific size belt/sheave, groove profile. The photo above shows you an example. Most suppliers have these gauges behind their sales counter to assist when necessary. They can be purchased if you'd like to have your own, or in many cases, they are made available from the manufacturers, FREE of charge. Ask your supplier about it. 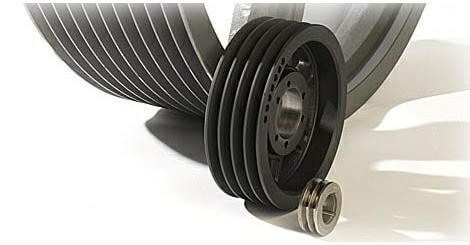 V-Belts... the mainstay of the power transmission industry. With the multitude of V-belts available, we must only assume there are just as many Sheaves available to accommodate the belts. And your assumption would be correct!!!

Sheaves are available as "bored to size", "bushing type", and "minimum bore" (with this latter type requiring you to bore it to the proper dimensions).

And, of course, there are numerous sheaves with "multi-groove" surfaces. I'm not sure of the maximum that can be cast and machined, but my research has indicated a manufacturer who claims they can fabricate a "12 groove" sheave. That's a lot of belts and a lot of power being transmitted.

And as I mentioned before, as an independent supplier, we sell numerous brand names of products. But one Power Transmission catalog that stands out for it's "completeness" is ContlTech [Continental] (previously Goodyear Rubber). Here's a link you can use to view the catalog. It's ONLY power transmission products (basically belts and sheaves) and it's 186 pages).

So if you're in the market for V-Belts and/or Sheaves for a new project or replacements, give the folks at A.R.&E. a call.