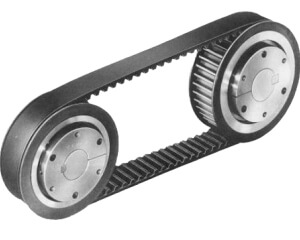 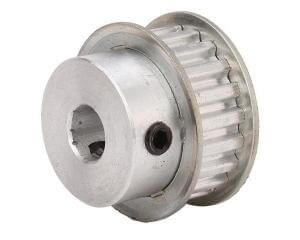 Timing and Synchronous belts and sheaves serve a special purpose in the power transmission industry.

Based on the "tooth" design of this category of belts and sheaves, the applications for them include those where a "positive" connection between the driver and driven equipment is a must. For instance, we use a "coupling" to connect the driver and driven equipment that allows for this positive connection. But, with a coupling, both components are rotating at the same speed. So we need a mechanism that allows us to change the speed and that's where Belts and Sheaves come in. The drawback of the belts and sheaves' solution is that even with proper maintenance and tension, it's possible to experience "slip" in the connection. Thus leaving the driver and driven equipment to turn at different speeds, if only during heavy loads or startup. The "timing" and "synchronous" belts and sheaves pretty much solve that problem. With the engaging of the tooth on the belt with the valley in the sheave, slip is NOT an issue.

As stated above, the potential for "slip" in conventional belts prevents their use where input and output shafts must be synchronized. Synchronous belts also referred to as timing belts, were developed to overcome this limitation. They have a toothed profile that mates with corresponding grooves in the pulleys, thereby providing the same positive engagement of chain or gears.

A stable belt length is critical for synchronous applications, so they were originally reinforced with steel. Today the most common reinforcement is glass fiber, but manufacturers use aramid if maximum capacity is required. Standard sections are MXL, XL, L, H, XH, and XXH. 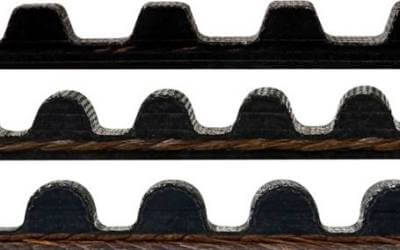 The trapezoidal tooth profile, which was the first to be used on synchronous belts, is recognized as standard. Belts with this configuration are commonly used in machine tools, textile machinery, home appliances, business equipment, and camshaft drives in engines.

Synchronous belts have several attractive features that put them in applications where there is no real need for shaft synchronization. They are thin and flexible, so they operate well on miniature drives and in applications involving high speeds or small pulleys. Preliminary studies indicate they may be the most efficient form of power transmission short of direct drive. Also, they can sustain high loads. For these reasons, synchronous belts have proved to be cost-effective in such nonsynchronous applications as drives for power saws, motorcycles, and vacuum-cleaner brushes.

The primary drawbacks of synchronous belts are their higher cost relative to other types, and demand for fairly accurate alignment of pulleys. In all, synchronous belts can be found on highly engineered and mass-produced drives, as well as in general industrial markets. An additional detriment, when it comes to comparisons, is that due to the tooth profile differences, a synchronous belt drive system will tend to be noisy. Some discussions will lean toward that being caused by the trapping of air between the belt tooth and the valley of the sheave as they engage and disengage.

A modified curvilinear tooth design, called STPD, appears similar to the HTD design. The pressure angle, tooth depth, and materials in this design provide improved load/life capacity and other characteristics such as non-ratcheting. A newer, modified curvilinear tooth design is called GT. MXL pitch belts were developed mainly to convey paper past "reading heads" at a constant speed. A high-friction coefficient, Polyurethane, drives the paper with zero slip.

Modified Curvilinear timing belt tooth profiles are available from numerous belt manufacturers. All of these profiles are less prone to backlash and excel at high-speed applications, with excellent tracking. The sizes are 2mm, 3mm, 5mm, 8mm, and 14mm pitches while they are typically manufactured using "Neoprene with fiberglass reinforcements." Some belts, for higher torque requirements, are typically made from Urethane with either Kevlar or Carbon reinforcements.

And of course, hybrid designs abound with this category of power transmission, just like any other group. Some nonstandard belt pitches, for special industrial use, are sized between XL (0.20 inches) and L (0.375 inches) such as 0.233, 0.246, and 0.250 inches, plus things like "Double-Sided" timing belts that can be used to drive on the TOP and BOTTOM of the belt.

In the auto industry, new belts are designated STA, AL, and ZA. The main difference between industrial and automotive sections is the size and tensile cord, which changes the pitch line differential. Automotive and industrial belts are not interchangeable.

The sheaves for timing/synchronous belts can be "Bored to Fit" or "Tapered Bushing" type attachment to the mounting shaft.

With these two belt and sheave designs, you want to make certain you call A.R.&E. for application assistance on your next "Synchronous Drive" project.